Tell us about your background and why you have become a Scientist.

I never thought of anything else, except probably being a writer. Science was an escape… from what “normal” people call “normal life”.

I grew up in a provincial town of Nizhny Novgorod (named Gorky at the time) 400 km east of Moscow, in Soviet era. My “normal life” was meant to be spent in the same neighborhood, with the same people, on the same job, submerged in the same routine woes, under a long (especially for a woman) list of explicit and implicit restrictions. At the same time, my dad, Ilia Mindlin, was a professor of mathematics at the Gorky Polytechnic Institute. I had at my fingertips a whole different world — hundreds of books. Jules Verne novels, each featuring a scientist or an engineer, free to travel all over the Earth. Bios of famous physicists. Mathematics essays revealing amazing secrets of numbers and shapes. The exciting world with no borders, which I dreamed to belong to.

A repeated winner of district math and physics olympiads, I got a fast-track admission to the Gorky State University, and spent there five happy years mastering the magic of science. After graduating in 1985, I stayed with the University for 15 more years, first as a research scientist, and then as an assistant/associate professor. My Kandidat Nauk (Ph.D. equivalent degree in Russia) dissertation describes three newly patented interferometers, each with an original data collecting/processing algorithm, designed to resolve fine details of celestial bodies. None of my interferometers made it out of a lab to the field, though…

In 2000, my husband Valeriy (also a graduate of the same University) and I, with our 8-year-old son and 2-year-old daughter, moved to the US.

What areas of research do you specialize?

Following the discovery of the tsunamigenic Cascadia subduction zone offshore the Pacific Northwest and the wake-up call of the 2004 Indian Ocean tsunami, NOAA opened the Center for Tsunami Research (NCTR) in Seattle, under the auspices of NOAA/PMEL and a joint institute (JISAO) with the University of Washington. The newly created NCTR worked on building an interactive system (abbreviated as SIFT), which integrated a numerical model and tsunami wave-height measurements. Numerical simulation of tsunamis, tuned with en-route measurements at open ocean buoys, was becoming one of the major tsunami forecasting tools. I joined NCTR in 2005.

There, I went into experimenting with modeling code, and eventually — already after separating with JISAO — published my own open-sourced version of a tsunami model, which I later benchmarked with the National Tsunami Hazard Mitigation Program. In the meantime, I suggested a new method to predict tidal signals at a tsunami buoy, which was added to SIFT. Compared to conventional methods, my method has exemplary tolerance to gaps in data, and does not rely on a long history of tidal observations (which a recently deployed buoy would not have) while providing no less accurate predictions. Next, I joined a New Zealand colleague in a project aimed at finding resonance modes of semi-enclosed water basins. Our second project was explaining tsunami propagation in terms of response functions connecting different locations in the wave path. The latter approach, further developed with the US colleagues, allows to predict the tsunami by propagating it from tsunameters rather than from the ever-unknown source. This experience of listening to Nature and comprehending Her answers would feed my inspiration for many years to come.

On 2010/02/27, a brand-new Pacific-wide network of NOAA’s tsunami buoys sprang into action, transmitting signals of the Maule tsunami; and a year later — of the Great East Japan tsunami (2011/03/11). With many other people, I was following the waves through these buoys to coastal tide gages, anxious to know what was coming to the coasts and how capable our models were in predicting it.

Unexpectedly, tide gages have revealed some unforeseen behaviors of tsunamis ascending in rivers. Deciphering the gage evidence, I attempted to parametrize river’s response to the tsunami, and to estimate the response parameters with observations of tides penetrating into rivers. These findings are elaborated in a small book of mine, Tsunami Propagation in Tidal Rivers. I hope that I’ll get to further develop this approach, as it leads towards better understanding tsunami and tidal dynamics in a river, and ultimately towards more accurate tsunami predictions. Presently, it is not feasible to forecast the tsunami ascending in a river with real-time numerical modeling. However, if we can infer the river admittance to an intruding wave with easy-to-obtain tidal observations, we might be able to immediately predict upriver penetration distance of a tsunami using its forecast near the river mouth.

What does a "Woman in STEM" mean to you?

When our children were growing up, being “a woman in STEM” meant to me both “a woman” and “STEM”. It meant involvement with school math clubs, and numerous science-fair projects which I did with my son and daughter. None of our projects ever came from a dusty list of science-projects-for-kids. It meant hiding in a crowd and watching my little daughter operating an optical bench made of Lego Duplo. She was showing the audience how a lens works, and cameras were clicking at what she did. And I was delighted that I could use my education to give more to my family.

On my first job in the US, being “a woman in STEM” meant a constant fight for the right to be a scientist. I was even “worse” than just a “woman”. I was a middle-age immigrant with two children and one heavy accent, entering a new field after a five-year break in employment. The ceiling for my perceived abilities, worthiness, and ultimate career goals was firmly set by the stereotypes. The kind of stereotypes, which allowed one of the worthies to sneer at me when he saw me dusting my desk, and suggest to continue with cleaning his office. The management seemed to take pride in denying me common-sense arrangements needed to balance work and family obligations. I spent six years in my entry-level position, and received a promotion only after the word “discrimination” was said out loud, and the HR discovered my heavy publication list. It was not just about the pay, though. It was about being able to attend conferences, publish papers without being scowled at, have a voice in the group meetings, and do not dread being cut down to size.

On a brighter note, I do not see any perspectives for the old cliches and related culture of bulling in the younger generation, in particular, among students in the college where I teach physics. Perhaps, these old ways are getting unpopular, nor did I run into them anywhere else. Being “a woman in STEM” means to me now that I can pass on my passion for science to young men and women alike.

When I was little, my dad once told me: if you want to be equal, you must be head and shoulders above.

I never knew how to follow, though. I wanted just the first part.

Elena Tolkova graduated from the Radiophysics department of the Nizhny Novgorod (Gorky) State University in Russia in 1985, and stayed with the University for 15 years after graduation -- first as a research associate/engineer, then as an assistant/associate professor -- while performing contract research, writing her dissertation, and teaching general physics, optics, and signal processing. Elena resumed her scientific career in the US in 2005, in the field of hydrodynamics. Elena worked as a research scientist at the University of Washington and a contractor at NOAA/Pacific Marine Environmental Laboratory, Seattle, helping to develop and implement a particular tsunami forecasting technology. In 2013, she continued her research at the NorthWest Research Associates, where she has developed an open-source numerical model (Cliffs) for simulating tsunami propagation and land inundation, co-authored a novel approach to using tsunami’s en-route measurements for tsunami predictions, and in collaboration with scientists at Tohoku University, Japan, investigated some puzzling tsunami behaviors in rivers. Since 2018, Elena teaches physics at Bellevue College. 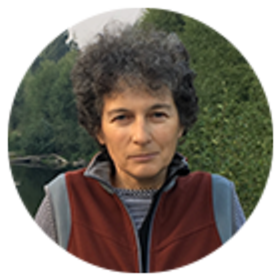 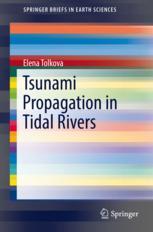