We interviewed the editors of our 1000th open access book, Health of People, Health of Planet and Our Responsibility: Climate Change, Air Pollution and Health to ask them why they published this book, why they chose open access and what advice they would give to book authors. Read the interview here and their biographies are available below. Wael Al-Delaimy is an epidemiologist and Professor of Global Health at the Department of Family Medicine and Public Health, University of California San Diego. He is co-founder and Associate Director of the UCSD Institute for Public Health. His research has focused on chronic diseases among children and adults and worked on studies of respiratory illnesses, cardiovascular diseases, diabetes and cancer. He helped introduce climate change and health as a new area to UCSD and the School of Medicine and was selected by the chancellor to represent health sciences on a campus-wide committee on understanding and protecting the planet. He led the formation, along with Prof. Ramanathan, of the working group on climate, environment and health as part of the Institute for Public Health that included 36  UCSD faculty with expertise in climate and environmental research, which contributed to the Vatican event that led to this book. This made climate change one of three focus areas of the institute which led it to be a focus area for the new UCSD School of Public Health. He was the Chair of the International Network for Epidemiology in Research that includes 22 epidemiology societies from across the world. He led a consensus paper policy brief on climate and health representing the views of these organizations as part of his role in that organization. Prior to Joining UCSD he was a fellow at Harvard University and a scientist with the World Health Organization International Agency for Research on Cancer. He has published more than 100 peer-reviewed publications and his recent work involves developing evidence-based policies and research ethics. He is Section Editor of Global Health and Sustainability in Springer’s journal Current Environmental Health Reports. 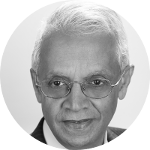 Veerabhadran Ramanathan is Frieman Endowed Presidential Chair in Climate Sustainability at the Scripps Institution of Oceanography, University of California, San Diego. Professor Ramanathan is an international leader in the science of climate change and in developing solutions for slowing global warming. In 1975, he discovered that the greenhouse effects of non-CO2 pollutant gases like Chlorofluorocarbons can warm the planet in significant ways. This discovery enabled the Montreal protocol to become the first successful climate mitigation policy. He led the Indian Ocean experiment which helped discover the wide-spread Atmospheric Brown Clouds(ABCs). He was honored as the science advisor for Pope Francis’ holy see delegation to the historic 2015 Paris climate summit and also advised CA Governor Jerry Brown on climate mitigation. In 2013, the UN environment program named him Champion of Earth; and in 2018, He (with James Hansen) was honored as the Tang Laureate for sustainability science. He chairs a major initiative of the ten-campus UC system effort titled: Bend the Curve towards Carbon Neutrality and Climate Stability. He has created a major University of California education protocol to empower One Million Climate Warriors with solutions to the climate change crisis. One component of this protocol is a digital multi-authored open access book edited by him. His lab's website can be found here. 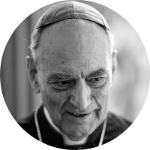 Msgr. Marcelo Sánchez Sorondo, Chancellor, Pontifical Academy of Sciences and Pontifical Academy of Social Sciences was born in Buenos Aires and was ordained a priest in 1968. He was lecturer in the history of philosophy at the Lateran University in Rome where he became full professor. He was dean of the Faculty of Philosophy at the same university and full professor of the history of philosophy at the Libera Università Maria SS. Assunta, Rome. In 1998 he was appointed Chancellor of the Pontifical Academies of Sciences and Social Sciences by St John Paul II, who then consecrated him titular Bishop of Vescovìo. Awards: Cavaliere di Gran Croce (Italy); official of honour of the Légion d’Honneur (France); Grão Mestre da Ordem de Rio Branco (Brazil), Official of the Republic of Austria, Knight of the Republic of Chile, Member of Accademia dei Gergofili, Member of the Accademia Italiana del Vino; Corresponding Member of the Academia de Ciencias de Cuba; Orden del Aguila Azteca (Mexico).

Get more impact for your research. Publish an open access book with us.