Radicalization and the need to re-think religious pluralism

Philosophy, or, much more generally, what we think in the privacy of our minds, has a lot more influence on the course of events in the world than many thinkers have supposed. How we think about things can determine who or what we become or what/how the world comes to be. If one had to pick out one attribute that characterizes the world of humans, it could well be the pervasive presence of difference in it, and the challenge to peaceful living that it presents to us.

One might be tempted to think today that we, living in modern times, have not only accepted the challenge but met it with a large amount of success. But, what frequently comes as a surprise to most of us, influenced particularly by liberal thinking and the ideals of a democratic society and polity, is the persistent occurrence of radicalisation of difference, of stretching a particular perspective to an irreconcilable extremity. This, in a way, is the new global challenge, an anxiety that threatens our cosy, comfortable liberal existence. We seem to be at an intellectual and emotional crossroad which demands a movement beyond liberalism.

Many of us have however come to think that liberalism¹, the dominant political and moral stance of modernity, has successfully addressed all issues relating to the pervasive phenomenon of the plurality of religions and indeed of (what Rawls described as) comprehensive positions of the good. Liberalism has two basic strands in its thinking about religion- Religions are matters of faith and that such matters must be distinguished from scepticism that is part of our rational pursuit of knowledge. It follows easily enough, for proponents of liberalism that as matters of faith; religions are not part of the legitimate knowledge discourse, because the latter is driven by reason as shaped by the enlightenment and its legacy. But religions do make knowledge claims. Since such claims have no room for sceptical oversight all religions must be placed outside the domain of knowledge. Thus for liberalism, all religions enjoy, a sort of equality, negative though this equality may be. Also, another principle that is central to liberalism is the principle of tolerance. Almost all forms of human life must be tolerated; and since forms of religious life are an inescapably dominant feature of humanity, liberal tolerance must extend to religions as well. Thus equality of religions and tolerance of all faiths is the liberal way to understand the plurality of religions. This is, of course, a very stark presentation of the liberal attitude to the plurality of religions.

If advocates of liberalism had got it right (so to say) the world would not be characterized (as it is) by a debilitating contrariety and increasing radicalization. Such difficulties indicate that it can be philosophically useful to explore alternative arguments about diversity by working from within religious traditions (from within ‘comprehensive’ theories of the good). In attempting this I have collected arguments from within the religiously plural Indian context in Rethinking the Relationship Between Religions: Moving Beyond Liberal Tolerance. That is my attempt to initiate a dialogue between liberal, phenomenological and religious arguments that seek to answer questions posed by pluralism in liberal democratic societies.

Perhaps the reason that Gandhian arguments can become important in such a connection (I have often argued) is that Gandhi is both avowedly secular and yet emphatic in his rejection of the public-private liberal dichotomy. Gandhi’s position becomes interesting because it presents a significant alternative to the liberal arguments for tolerance. Also, Gandhi does not speak about toleration as a way of thinking about religious differences.  He suggests that one should honour rather than tolerate all ‘other’ conceptions of truth.  Gandhi often suggests that one should think of the religious truths of conflicting others as if they were one’s own. One might consider what difference such a rethinking, and such a shift from tolerance to honour, could make on public political space and on radicalization in the contemporary world.

¹ It is important to note that the author is aware that there are many variants of Liberalism. For the sake of brevity, the author refers to utilitarian and Rawlsian versions of liberalism.

Bindu Puri is Professor of Philosophy, Jawaharlal Nehru University, Delhi. She is the Co-Editor of the aforementioned upcoming anthology by Springer: Rethinking the Relationship Between Religions: Moving Beyond Liberal Tolerance.  She is also the author of the 2015 Springer monograph: The Tagore-Gandhi Debate on Matters of Truth and Untruth. 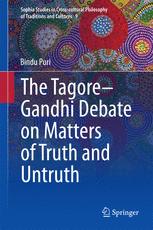