My 2020 book, Cosmopolitanism and the Evils of the World, will be of interest to the reading public as well as specialists in philosophy, political science, international relations, and environmental studies.

What is cosmopolitanism?  It is a theory about the place of human beings in the scheme of things.  We are all “citizens of the world.”  Differences in religious belief, race, ethnicity, gender, are precious variations within the family of mankind.  Every one of us is a brother or sister to every other human being.

Every human being possesses inherent dignity. Cosmopolitanism requires a theory of dignity, but most important documents (such as the UN Charter and the constitutions of many nation-states) and even the writings of cosmopolitan thinkers, lack substance.  Confusion and scepticism abound.  My book offers a biotic and enhancement theory of dignity.  Three levels of dignity are established through analysis:  Behavioral plasticity and having a world, caring and social values, and autonomy.  Human beings possess all three levels.  A new theory of autonomy is set out.

Cosmopolitanism begins in the ancient world with Diogenes the Cynic, and is continued by the Stoics, among whom the most important is Marcus Aurelius.  Whereas ancient cosmopolitanism is primarily ethical, modern cosmopolitanism is expanded into a theory of international relations and world government by Immanuel Kant (1724 -1804).

Kant thought that both nature and history work together towards the eventual establishment of a world organization and a complementary world community. The centrepiece of Kant’s cosmopolitanism is the attempt to eliminate one great evil—war.

Late in his life, Kant sketched the outline of a world organization, which he called a “peace federation.” Nations of the earth by voluntarily joining would agree to certain principles:  recognition of individual human beings as possessed of rights which transcend the boundaries of nation-states; elimination of standing armies but allowing a reserve army; elimination of the draft (it violates autonomy), and the gradual movement towards a world constitution while retaining the practical need for individual nation-state rule (federalism).

Cosmopolitanism and the Evils of the World contains an in-depth analysis of Kant’s theory of a world community.  Citing Kant’s texts, love/caring and respect are co-equal in Kantian ethics. Kant states that if humans were not worthy of love/care, then they would not be worthy of respect.  Kant’s theory of global hospitality is fascinating and is part of his care/respect ethics. You have a right to enter another country, provided you do not have bad intentions (universalized, international vetting).  My book further develops the idea of a world community by incorporating recent developments in theory and practice (e.g., multi-national peace corps; circulation of fine art around the world, required courses in foreign cultures in both high schools and universities).

My book sets out seven problems with the United Nations, the descendent of Kant’s peace federation, and develops solutions to these problems.  I argue for a bicameral UN assembly, one half of which is composed of NGOs (a people’s assembly).  It is urgent that the United Nations create a seventh structure---a Council for the Preservation and Restoration of the Environment. A full-length examination by scientists of the state of the biosphere is provided, and it is clear that the future of life on earth is imperiled.

Have you ever wondered what evil is?  Part II of my work begins with a taxonomy of the concepts of bad, wrong, and evil. This is the only comprehensive taxonomy in print at this time. I establish a broad definition of evil as the inversion of civilization and the deformation of life (inversion characteristics are enumerated), and develop a specific and precise definition of evildoing.  Local evildoing is distinguished from transnational evildoing.

Following the taxonomy rigorous analyses of transnational evils are set out:  the destruction of the earth’s biosphere, genocide, slavery (including child slavery), torture, and terrorism.  These involve inflicting by design severe harm (setback theory), and are completely undeserved.  They are inherently evil.

I conclude my book with a list of cosmopolitan recommendations for the reduction of transnational evils.

Michael H. DeArmey is Charles W. Moorman Distinguished Professor of Philosophy at the University of Southern Mississippi. He was educated at the University of Memphis, Tulane and Yale Universities, and was a Mellon Doctoral Fellow and a Yale Post-Doctoral Fellow. His publications/research have/has been in American philosophy, ethics, and cosmopolitanism. He is currently developing an online course on John Dewey’s lifelong analysis of democracy. Professor DeArmey welcomes comments or questions about Cosmopolitanism and the Evils of the World.
Email: mdearmey@comcast.net 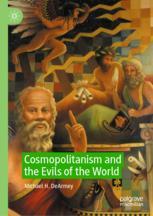