Philosophy, my love. You came to me late in life. These are relationships with a sense of autumn, a sense of immortality. In the 1980s in Russia, at the time of my Hippocratic oath at medical school, I read Lenin, Marx, and Hegel, and a bit of Feuerbach and Popper, and it was OK---actually, self-evident and uneventful. But Avicenna’s sharply medieval profile in the medical history book branded my mind. And then, came a promise—the white, cooling presence of Wittgenstein’s Tractatus: the terms of endearment. It took me thirty long years to fully face Husserl:  the promise turned real, the vocation.

I am writing this love letter today, on the fated Saturday of November 7, 2020, in Berkeley, United States. The “alternative facts” are finally losing their bite. I thank you, philosophy, for the firm hand you gave me during the past four years of political insanity.  Working my way through the Logical Investigations has been my saving grace. In the world of menacing Goya-esque shades, you remained real. You spoke the truth, you stood clear of lies and greed, you safeguarded my mind.  Please reach out to those still confused, whose mind is in rage or despair …  Is it the immunity to virus, or is it our mental health that is at test?  Aequam servare mentem (Horace), ‘keep the clear mind’— like the gladiators of Roman antiquity, we need your clarity, Philosophy, to be victorious over the pandemics, over the climate catastrophe, to win life over self-destruction.

The kind of philosophy I do is called phenomenology (a.k.a. continental philosophy).  As would be true for many people (I suspect), I did not chose one form of philosophy over the other.  The most difficult thing, a Sufi philosopher, Ibn-Arabi, says, is to know one’s own predisposition. How many times does one get into relationships before making it right? Phenomenology landed on my lap by an accident, but with a strength of extreme determination. I was searching for a method to study spiritual phenomena--and nothing seemed to work. I felt empty, disenfranchised: how does one reconcile the immediate sense of truth in experience with the impossibility of passing this sense to others?  The life of the soul, inwardness, spirit, all the things intuitively graspable but intellectually extremely vague, a class of events embraced by the brave New Age but everywhere else believed to be epiphenomenal, with no rights to truth...  I entered the researcher “dark night of the soul”. Then, a random encounter with an obscure Sufi sheikh, obviously a charlatan, gave me the word: phenomenology.  I read, and I found my method, or rather, I found the world of meaning in which, suddenly, I could breathe and walk.  By contrast with egocentric top-down choices, these passive inevitabilities are indubitable.
Phenomenological philosophy proceeds by clarification of the expressions of experience. From there, one thinks what, in the mind or in the cosmos, makes such experience possible. These are the so-called transcendental apriori-s.  By means of such reverse reflection, religious or spiritual experience acquires its horizon of possibility and becomes legitimized.  Instead of being something crazy or elitist, it turns into a real research problem which is interesting enough to become a subject of a systematic study.  This grew into a book, The Problem of Religious Experience (Springer 2019).  But then one may ask: what does this angle have to do with counteracting the pressures of social insanity?

There is a Buddhist story about a man who was meditating in the mountains in order to see Buddha Maitreya. With no Buddha in sight for many years, the man left the mountain. Down the road, one last act of compassion purifies his mind: all efforts suddenly make sense, everything comes together, and he sees the luminous Buddha. In a sense, philosophy works in the same manner: one strives to think, to find the path through the manifolds of meaning, to find the words which grasp the meaning and pass it onto the other person, unaltered. One learns to ask the right questions. One follows ideas into their history and communes with the great minds of the past. Gradually, slowly, the mind starts seeing, and gradually, slowly, the universe starts making sense. Husserl’s idea of truth goes beyond Aristotelian correlation, into the full adequacy of thought and what is—this is mathesis universalis, the first philosophy. “Alternative facts” dissolve, while naked facts and things as they are come up front. Philosophy is truth in perception.

If, O reader, you are a spiritual person, you probably have heard many times that in order to advance on the spiritual path, you need to silence your mind.  Please know:  this is a lie. The reality is that systematic thinking is embodied, more so than any yoga or meditation can ever give you. Hence, philosophy is an experience. The hard work of philosophizing brings in a state of peace and fullness like no other, the state of oneness with God (theosis) of Christian faith, the “stateless state” of Vedanta.  It is just recently that I had such an experience while working on the axiomatic theory of imaginary numbers in the early Husserl—who could imagine this?  But if one pauses and reflects, this is exactly how it should be. The medieval Iranian philosopher Suhrawardi says that in knowledge, the knower and the known become one; Husserl says that when your thought is adequate to how things are, intention is fulfilled by its object, and this is the experience of truth… so, it feels right to think, to exercise your mental muscle, to reach the luminous certainty of truth. She is both savvy and smart, Philosophy, this belated love of mine.

Olga Louchakova-Schwartz is the Editor of The Problem of Religious Experience: Case Studies in Phenomenology, with Reflections and Commentaries published by Springer within the Contributions to Phenomenology book series. 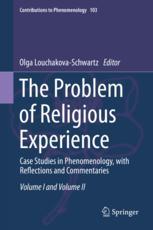