"Imagine that you are working in a mid-size sales company. You and your coworker Michael have built a comfortable rapport after working together for quite a while. One day, Michael, who is an openly transgender man (he is biologically female, but identifies and lives life as a man), tells you that Brian, another person in the office, has been repeatedly making unwanted sexual comments toward him. Michael tells you that he feels uncomfortable and distressed by Brian’s comments but isn’t sure how to respond."

In the opening brief account, what do you think Brian’s motives are? Is Brian’s behavior acceptable? And, what should Michael do?

Although recent attention has been drawn to sexual harassment by the Me Too Movement, much of this coverage assumes male perpetrators and female targets within an assumed cisgender heterosexual context. But what if the target of this harassment is lesbian, gay, bisexual, queer-identified, or transgender? This is the question that was addressed by Sheila Brassel, Isis Settles, and NiCole Buchanan in a recent paper published in Sex Roles: “Lay (Mis)Perceptions of Sexual Harassment toward Transgender, Lesbian, and Gay Employees.”

Turning to comparisons of women versus men targets, harassment of women was regarded as less acceptable than harassment of men to the extent that the former was viewed as motivated more by prejudice.

Across all scenarios, perceived acceptability mattered. The less acceptable harassment was perceived to be, the more students recommended that the target report the harassment to their supervisor or file a formal complaint.

There is a long history of research on sexual harassment that shows that how people view cases of unwanted sexual interactions in the workplace can vary, making the identification of sexual harassment complex. This study adds to this complexity by expanding on how a perpetrator’s motives (i.e., power, prejudice, or attraction) may be regarded by third-party observers. It further shows that how assumptions about those motives can affect judgments about the (un)acceptability of sexual harassment, which, in turn, can influence expectations about how targets with various gender and sexual identities should respond.

Editor-in-Chief of Sex Roles: A Journal of Research 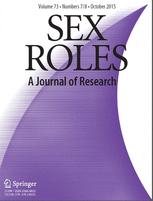