Some thoughts on Lesbian and Gay Childhoods

In developmental psychology or childhood studies literature, particularly research on childhood and child rights in India, the lesbian, gay or queer child is invisible. There is the normative and universal narrative of childhood - the child within the family unit, innocent and uncorrupted by society, cared for by the mother in the domestic, private domain. This child is an adjunct of the heteronormative family and their identity is subsumed within that of the family and their ethnic community. In contrast to this normative/ read as ‘normal’ child are the narratives of the ‘other’ children; those outside of the family unit and in need of state intervention, protection, objects of state welfare (Balakrishnan 2011). Multiple identities have been ascribed to such ‘deviant’ children within development literature and state policy. Some examples include orphan children, children in conflict with law, trafficked children, child labourers and so on. It is interesting to note that, despite sharing commonalities with these ‘deviant’ children, such as facing neglect, abuse, violence within families, schools, colleges, and among peer groups (Shah et al. 2015; Ghosh et al. 2011; PUCL-K 2001), gay and lesbian children do not figure in the discourse around childhood vulnerabilities in India. Not to mention that there are queer children among the child labourers, trafficked children and so on. In fact, silence surrounding the lived experiences of queer children, as well as the deeply entrenched assumptions of gender binarism and heterosexism in cultural and institutional contexts means that experiences of queer children are inarticulable (1) and are rendered unintelligible. Even the queer rights movements primarily engage with rights of adults and the queer child (except for discussion around child sexual abuse) is largely absent here too. Family studies too as a discipline, particularly in India is largely blind to the idea that sexual minority children are minorities even in their own families, having to figure out their own identities with no role models in parents or siblings and with the added burden of adults in the family trying to ‘correct/ cure’ their queerness.

My book, ‘Growing Up Gay in Urban India – a critical psychosocial perspective’ explores experiences of growing up—through childhood, adolescence, and young adulthood of lesbian and gay individuals within their/ our homes, schools, neighbourhoods, and among friends; exploring their journeys of finding themselves, finding friendship, love and community while living in a heterosexually constructed world. The book is based on a study with young gay and lesbian persons in the cities of Mumbai and Pune and employs a critical psychosocial and life course perspective. What this means is that the book attempts to study the layered narratives of growing up by simultaneously being attentive to subjectivities and individual processes of making sense of an emerging non-normative sexuality and parallelly focussing on the socio-cultural-historical context within which these lives are unfolding. A context that insists on the existence of only two forms of gender and one form of sexuality i.e. attraction between the two genders and one form of acceptable relationship i.e. respectable marriage. The life course perspective that I use as frame of analysis is also keenly attentive to historical time and space. This implies that the time (late 1980s and early 90s) and space (cities of Bombay and Pune) in which the participants of this study were growing up is significant in understanding their growing up experiences.

The motivation behind this book is to start the much needed critical conversations within the disciplines of psychology, social work, childhood studies, and family studies in India and to enable families, teachers, counsellors, therapists, activists, academics and policy-law makers to develop an understanding of the challenges inherent in growing up as queer and begin to think of ways to address these. Given my location as a queer person and as a student, practitioner and now educator of the psy disciplines (mental health sciences), this book has been written with a critical stance from within the disciplines that have had a long history of pathologizing homosexuality and is an attempt to produce knowledge from the margins based on lived realities of those of us who live and grow up outside of the ‘charmed circle’ (2)

(1)        In the absence of language (except for pathologizing terms) that can speak to and of these lived experiences, these experiences cannot be described or articulated. They simply fall through the cracks between language, experience, and representation.

(2)      Charmed circle has been used by G Rubin in her essay ‘Thinking Sex’, 1984 to refer to certain kinds of sexuality (married, monogamous, for procreation, heterosexuality and so on) that is valued and privileged in a given society.

Ketki Ranade/ KP is Assistant Professor and Chairperson, Center for Health and Mental Health, School of Social Work, Tata Institute of Social Sciences, Mumbai. Ketki is member of a queer feminist LBT collective – Labia in Bombay and is currently working on a resource and training manual on Queer Affirmative Counselling Practice for Mental Health Professionals and students in India. 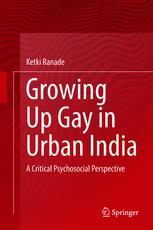