LGBTIQ+ People of Color and Migrants: Outside of the “Ivory Tower”

In this article Luis Navarro-Ayala, author of the Palgrave book Queering Transcultural Encounters, discusses LGBTIQ+ equality, academic interdisciplinarity and the constant interactions between academia and the “real” world

Academia can no longer afford to live in its “ivory tower.” It must abandon its exclusiveness and enter the “real” world. We no longer live in isolation from each other. The rapid changes produced by globalization and technology have not only made us aware of each other but have also encouraged us to try to understand each other. Interdisciplinarity is crucial in our attempt to achieve a complete understanding in today’s world. We are continuously exposed to different academic disciplines in the humanities and social sciences: literature nourishes from social events to provide better descriptions of the events performed by its characters. Likewise, engaged authors incorporate philosophical, sociological or psychological concepts in order to create more accurate and insightful narratives, which could help the reader not only to identify with a particular situation or character but, most importantly, to recognize different ways of seeing the world as well as diverse approaches of responding to the world and its challenges.

Within this context, interdisciplinarity has also become a site of resistance for LGBTIQ+ of color and migrants, who continue to face challenges in the so-called postcolonial and post-racial era in the West and global North. Particularly in the United States, where there is a backlash to the post-racial atmosphere and the success of Marriage Equality enjoyed during the Obama Administration. We, LGBTIQ+ of color and migrants in the United States, live in continuous fear of our differences: Not only are we targeted for being queer or ethnicized others, but we are also ostracized and dehumanized. The current American political climate, which seems to allow utterances of the utmost homophobic and racist sentiments, continues to treat queers as sexually-frenzied and men of color as terrorists or criminals.

But rather than succumbing to the structural discrimination and homophobia licensed by the existing climate in the United States, we, LGBTIQ+ of color and migrants, can seize this moment to develop new sites of resistance. Similar to the civil rights’ movements from the sixties and seventies, the AIDS pandemic from the eighties, as well as Marriage Equality and Black Lives Matter in the new millennium, we can also create tools of resistance found across academic disciplines. Politics nourishes sociology, literature, information and social media, as well as artistic representations online and in television and film. My own work has also benefited from the study of several disciplines. In addition to literary criticism, my research’s interdisciplinary scope also includes analyses on history, political science, sociology, queer of color critique, theatre, and transnational information media.

Given the interdisciplinary approach to bring together the global South, my forthcoming book, Queering Transcultural Encounters: Bodies, Image, and Frenchness in Latin America and North Africa (Palgrave Macmillan, 2018), may help create new sites of resistance for queers of color and queer migrants in the United States. I propose a type of parallelism: Orientalism for the French (and the West) corresponds to Frenchness for the Latin American and North African imaginaries, and each demands that the transcultural queer create unique forms of agency. My research ascertains the transcultural queer body as inherently associated with space—as represented in travel literature, homosexual tourism or immigration to Europe, more specifically France. The transcultural queer subverts the national and ethno-sexual hegemonies in order to gain subject formation and create new sites of resistance to global economic power structures.

These innovative ways to overcome repression and injustice in the global South shed light to the challenges faced by LGBTIQ+ of color and migrants in the global North. My study treats the transcultural queer body as a physical and symbolic entity which is intrinsically connected with space. It contributes to transnational and transcultural developments in the field of queer studies, a domain that has increasingly begun to account for minority identities. Taking an additional step, I use an intersectionality approach to examine bodily representations, socioeconomic specificities and postcolonial politics, which further complicate queer experiences. More specifically, I intersect constructions of nationalism, culture, identity, gender, sexuality, socioeconomic class, race, and ethnicity in Latin American and Francophone literatures in twentieth and twenty-first centuries.

As we continue to celebrate LGBTIQ+ equality, academic interdisciplinarity and the constant interactions between academia and the “real” world are a crucial reminder of our interconnectedness. This is particularly significant, as LGBTIQ+ of color and migrants continue to face discrimination and injustice around the globe. However, the knowledge discovered in academic theories becomes a site of resistance which may assist to navigate the realities around them. My reading on cultures of survival, mimicry, and exchange relationships help explain how social conditions prevent or allow ethnicized queer others gain sexual agency and reclaim their status as subjects in order to challenge the structures of global socioeconomic oppression. 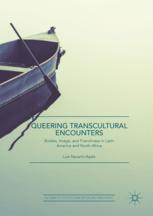