Tackling the ‘Toxicity’ of Sport in an Inclusive Society

Rory Magrath, editor of LGBT Athletes in the Sports Media

Attitudes toward the LGBTQ+ community have improved considerably across the Western world in recent years. So much of what we now take for granted – the most basic levels of equality – is relatively new. Likely the most obvious example of this has been the landmark introduction of same-sex marriage: back in 2001, the Netherlands became the first country in the world to legalize same-sex marriage. While a handful of other nations followed suit shortly afterward, this wasn’t the case in the UK until 2014, the US in 2015, and Australia in 2017. In 2019, Taiwan became the first Asian country to permit same-sex unions. At the time of writing, around 30 countries and territories across the world have done the same—as usefully outlined by Pew Research Center.

But despite these far-reaching changes, matters are far more complex in the traditionally macho world of sport. As I wrote with my co-editors, Jamie Cleland and Eric Anderson in the Palgrave Handbook of Masculinity and Sport, the motivation behind the establishment of the world’s most dominant sports in the mid-19th century lay “primarily in the affirmation of an idealized form of masculinity; one distanced from femininity and homosexuality” (1). Sport, therefore, socialized boys into an environment characterized by physical violence, overt aggression, sexism, excessive competitiveness, and – of course – homophobia. For well over a century, sport was a toxic environment for LGBTQ+ communities.

While it is assumed that sport remains the last bastion of homophobia in civilized society, a significant body of recent scholarly research has shown that LGBTQ+ people are now “more welcomed, embraced, and celebrated than ever before” (2). With research having initially emerged in the early-2000s, this has since extended to a multitude of sports – from rugby to cheerleading, from equestrian to mixed martial arts – across various levels, including elite. Rather than the toxic atmosphere from decades previous, this body of research has found inclusive attitudes flourishing in a space where it was thought almost impossible.

My own research on men’s soccer – which has been criticized by the British government for “having [more of] problem with homophobia” than other sports – parallels this inclusivity. In my 2017 book, Inclusive Masculinities in Contemporary Football, data collected with elite young soccer players showed that, aside from those who maintain fundamentalist religious views, these young men espouse positive attitudes toward homosexuality in soccer and broader society. Some of my other research has also focused on British fans’ acceptance of gay soccer players, changing media representation of homosexuality in soccer, critiques of anti-homophobia initiatives, and the effect of changing attitudes on masculinity. Forthcoming research also aims to give LGBTQ+ fans a voice in an environment from which they have previously been excluded.

While, ultimately, there do remain issues affecting sport’s relationship with LGBTQ+ folks (discriminatory chanting, relatively low number of ‘out’ LGBTQ+ athletes, and international governing bodies’ refusal to prioritize diversity and inclusion), my research – and that of others – points toward a positive future: one of evolving equality.

Editor of LGBT Athletes in the Sports Media 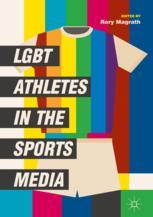