Sustainability and Chinese investment in Africa

Less-developed economies’ move towards industrialization is often hampered by a lack of infrastructure, particularly in terms of transport and communication, which prevents interregional trade. Moreover, a dearth of energy and water infrastructure prevents greater mechanisation of farming and manufacturing. Yet industrialization often comes at a high environmental cost. Goal 9 of the UN’s Sustainable Development Goals (SDGs) focuses on investments in sustainable infrastructure, which is seen as “crucial to achieving sustainable development and empowering communities”. Goal 9’s wide-ranging targets include plans to broaden access to the internet, diversify and upgrade the technological capabilities of industry, retrofit industries to make them sustainable, enlarge industry’s share of employment and gross domestic product, enhance scientific research, and increase access to financial services.

The Go Global policy of the People’s Republic of China (PRC), launched in the early 2000s, and the Belt and Road Initiative (BRI), launched in 2013, have created a network of Chinese companies and funding institutions that has made the PRC an integral player in achieving Goal 9’s targets. The PRC, with significant state control over both private and state-owned enterprises, huge foreign reserves, and a recent history of economic development, has been a substantial driver of economic development, particularly in Africa, since the early 2000s. The PRC delivered much of the continent’s new transport, communication, energy and water infrastructure over the past 20 years. This has been framed as part of a wider strategy by the PRC to gain a greater level of influence in the developing world, increasing the state’s overall influence globally. However, despite the narrative that the PRC is a unitary actor controlled from Beijing, that is rarely the case on the ground. China’s actors often clash with one another in terms of implementing the state’s foreign economic policy, taking actions that are counterproductive to other Chinese actors. This is generally due to the fact that these actors have discrete, unlinked goals; for example the Chinese Ministry for Commerce’s core goal is to increase Chinese economic activity, while the Chinese Ministry for Foreign Affairs is tasked with increasing Chinese influence with other states. These goals often do not go hand in hand. The clashes that arise among Chinese foreign policy actors can have profound effects on how the PRC delivers Goal 9’s targets. While some Chinese foreign policy actors and some Chinese companies do attempt to ensure their economic actions in the developing world are sustainable, others do little to prevent negative environmental and social externalities. The enormous scale of the PRC’s actions in terms of infrastructure advancement in the developing world makes it impossible for Beijing to ensure that Chinese actors meet the targets of the SDG. Therefore, while China does hold many of the assets needed to help the international community  reach Goal 9’s targets, a basic level of transparency in its foreign economic policy is needed before China can become an effective force.

Dr Niall Duggan is a lecturer in international relations at the Department of Government and Politics at University College Cork, Ireland. His main research focuses is emerging economies in global governance; international relations (IR) of the Global South; and China’s foreign and security policies, with a special focus on Sino-African and Sino-EU relations. 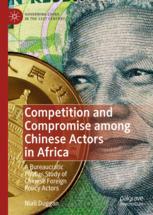