Why research is important to attaining gender equality

In honor of International Women's Day (March 8th) we're highlighting the expertise and experience of a few of our female authors whose own research investigates topics related to gender equality. Here we're sharing a guest blog from Mousumi Dutta, Professor and Head of the Economics Department at Presidency University in Kolkata, India. Plus, explore Springer Nature's new SDG5 hub for more discussions around gender equality.

As India moves towards becoming an economic and political superpower, gender discrimination remains a major and persistent blot on our achievements. The Global Gender Gap data shows that women's economic participation and opportunity is worse in India than in 95% of the 135 other countries studied. Women workers engaged in the formal sector earn 19% less than men. From 2011 to 2012, there was a 7.5% increase in domestic violence, while over 5,000 dowry deaths were reported in 2018 in the country. Not surprisingly, India's Gender Inequality Index rating in 2017 is low (0.524); India is ranked in the bottom 20% of countries. The country, therefore, has a long way to go to attain the Sustainable Development Goal of attaining gender inequality and empower all women and girls (SDG5).

My interest on gender issues was aroused in 2009. I had been invited to be associated with a Rosa Luxemburg Society-funded study on “Women, Work and Education”. I had to analyse the data on women workers in the IT sector. Although the respondents were highly educated, and were earning high wages, I was surprised at how their agency was constrained in the domain of the working area and within their home.

Subsequently, in my research, I have analysed the dynamics of gender relations and disparity in domains of education, health, and labour market to examine how gender discrimination has evolved in the current millennium. Results reveal some positive signs. In school level education, for instance, the gender gap in enrolment and completion rate of primary, secondary, and high school levels has decreased. In urban areas, a child who completes secondary school is more likely to complete high school if the child is a girl. Another interesting insight is that, while gender disparities do exist in economically and socially backward communities like the Muslim community, such disparities are less than within advantaged socio-religious groups. 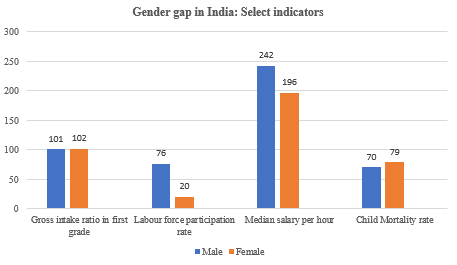 Failures, however, far outweigh the successes. In the labour market, there is considerable gender-based occupational segregation. Women workers are concentrated in low paying sectors; further, their earnings are below that of male workers, after accounting for factors like education and experience. Glass ceilings exist even in high paying sectors, like the Information Technology and Information Technology Enabled Sector. Using National Sample Survey Office (NSSO) data, we estimated that the country lost 1.13% of GDP in 2011-12 because of gender-based segregation in the Indian labour market. Women workers complain that, on one hand they are expected to play the role of caregiver; while, on the other, they have to conform to work patterns defined by male workers.

The vulnerability of women increases during moments of crises.

In one of our recent studies funded by The International Growth Centre (IGC) we found that, during the lockdown to contain COVID-19, the number of food groups consumed by women decreased significantly in rural Bihar. Consequently, a lower proportion of women attain the Minimum Dietary Diversity norm of consuming at least four food groups.

While researchers have traditionally focused on how male members act to control the agency of women, it is also time to investigate the complexities of intra-household relationships. Another IGC funded study by us observed that mothers-in-law attended meetings of Self-Help Groups instead of members; they became gatekeepers controlling the flow of information from grass root health workers to their daughters-in-law, ensuring conformity to traditional norms relating to reproductive health, fertility, and dietary practices.

Since, gender discrimination is a multi-dimensional phenomenon, progress on this front has to be assessed using indicators in different fields. Fortunately, there are many such indicators that may be evaluated to assess the fields where we are lagging behind. For instance, NSSO releases information on work force participation, male and female wages, and educational attainments every five years. Decadal Census provides information on sex ratio—for children in the age group 0-6 years, and for the entire population; this data is supplemented by Sample Registration Survey every year. Census also provides information on work force participation, and education levels disaggregating the data by gender, age groups and by social groups. Information on consumption of major food groups, anaemia, contraception use, violence and empowerment levels in different domains are provided in National Family Health Surveys. So, it is not that information is not there. Rather researchers need to utilise this rich data base and provide meaningful cutting-edge policy-centric research to highlight the progress with respect to gender disparity.

Unfortunately, the body of research that has been produced in the field of gender has rarely tried to engage with policy makers but focused simply on publishing.

One reason for this is that policy makers are hostile to any whiff of criticism, and are often harsh to academic researchers, dismissing their work as ivory tower intellectualism.

Researchers must rise to the challenge and evolve new forms of disseminating their idea. While blogs are becoming popular, researchers may also think of posting videos of five minutes’ duration, bringing out the highlights of their work. Further, instead of a frontal attack on Government policies, researchers should acknowledge the ground level realities that constrain the actions of policy makers and executive bodies implementing policy decisions. A sympathetic portrayal of how policy makers and executive officers try to implement decisions can gradually win over their confidence and get rid of the image of researchers as highbrows indulging in Government baiting.

While researchers may look down upon such efforts at populism, they should realise that they have a social obligation. While it is true that funds to research have dried up in recent years, one reason for this is the failure of academics to produce socially meaningful and policy relevant research. We should realise that the country has invested a lot in education — in absolute terms, at least. Monitoring the country’s progress towards meeting the Sustainable Development Goal of gender equality is one way of paying back our debt to society. 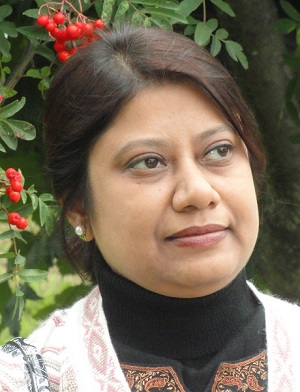