Exploring societal impact: “We have a mandate to maximise how our research is used.” In this interview, we speak to Professor Davide Iannuzzi, university research chair professor in experimental physics at Vrije Universiteit Amsterdam and author of the book Entrepreneurship for Physicists.

Alongside his academic work, he founded his own company, Optics11, based on an invention that came from his own research. He explains his entrepreneurial journey and how he’s now helping other academics to become entrepreneurs through launching and running the Demonstrator Lab.

You founded Optics11 in 2011 and it’s now grown to a profitable business of nearly 60 people. Can you tell us a bit about how you came to found the company?

I'm a physicist – that’s my main background – and up until around 2005 I’d been working solely as a researcher. Then, as part of my research, I invented a new device – a new type of sensor. When I did this, I immediately thought it had potential and I took the initiative and decided to patent it. And this sparked the idea that perhaps I could bring it to market.

In the short-term though, my first approach was to publish and present at academic conferences about my invention – which was, of course, part of my academic duty. And quite quickly it became a success. I received several awards for the work. So it created a lot of visibility for me.

What I think many academics don’t necessarily realise is that this type of visibility is essentially marketing – it’s your own branding. Through putting in a lot of time to publicise and promote the work I’d done, I then received some important research grants which allowed me to further develop the technology of my invention.

But essentially, when it came to setting up the company, it was always going to be a bit of a gamble. And I just had to say, "Okay, I believe in this technology. I will spend a significant fraction of my career on that. And if I find open minded people, I will get tenure. If not, I will not."

This was in 2011, when I teamed up with a serial entrepreneur. And together, the two of us founded Optics11, which has grown from just two people bootstrapping the company to the successful business it is today.

You’ve said setting up the company was a gamble – particularly with how it might affect your academic career. How has becoming an entrepreneur affected your career?

It was definitely a gamble. My career was going very well up to that point. The development grants I’d received led to around 50 new publications and many more invitations to conferences. So some might argue that I could be putting all that at risk. But in some ways I also saw it as a way to set myself apart from others in my field and get recognition in a different way.

If I had wanted to compete solely based on my research, my “academic output”, I’m not sure I would have become a professor at 41. But because I’ve built this double profile – as an entrepreneur and as someone who supports knowledge transfer, I have other strings to my bow.

Once the company was up and running, I was able to take a bit more of a step back. But by that time I’d realised how much I was enjoying entrepreneurship and being part of a business. Colleagues started coming to me for advice on how they could do similar things and I began sharing my experiences. I enjoyed this aspect of my work so much that in 2013, I decided to do a Masters in Business Administration part-time and in parallel to my career.

There’s a lot of personal satisfaction that comes with founding a successful business and bringing something you’ve created to society. People around the world are using the technology that I invented. There are 60 people in jobs because we founded this company. It’s very fulfilling to know that you’ve enabled that – that you’ve had that impact.

Your passion for helping other academics develop their entrepreneurial skills led you to launch the Demonstrator Lab in 2017. Can you tell us what it is and how it works?

Back in 2010, I applied for a professor position in the section of science, business and innovation. And when I applied, I explicitly said, "We should have a laboratory where aspiring entrepreneurs can get their feet wet."

I didn't get that position, but I didn’t forget the idea. When I became a professor a couple of years later, I started to talk about the concept of the lab with colleagues. One of them suggested asking for money from the City of Amsterdam Municipality through a grant scheme they were running at the time – and it worked, they gave us the money we needed to set it up.

We started in 2017 with a 500sqm of empty space. Now, half of it is lab space, with everything from chemical hoods and optical tables, to 3D printers, laser cutters, and so on. And then the other half is office space.

We take researchers with very early phase ideas – anyone from Bachelors students to retired professors. Initially this was just in physics, but then we extended it to all scientific areas, then STEM and now to everything.

We offer them development space, coaching, and support to grow their idea. Sometimes they fail, and that’s ok because that’s always going to be part of entrepreneurship, but we do our best to help them reach the point where they can get external investment. For scientific projects, we also have a seed fund so they can develop their first prototype.

Then, importantly, we help connect them with the right people. For example, we organise events where we invite lots of people from our network to see what the researchers are doing and what’s being developed.

We do all this under two main conditions. The first is that it's an arm's length relationship, meaning we don't impose our way of thinking on anyone. They are in charge of their company. I advise them, but if they want to forget about my advice, they're very welcome to. The other condition is that we don't ask anything in return. And this is very important because it lowers the entry barriers.

So far we’ve had some 70 projects come through the lab. And out of that, there have been 11 start-ups and one NGO. Three of these start-ups are already at teams of around 20 people – so they’re going great guns. And there are another two or three this year that are looking promising.

There’s such a demand for the Lab now that in January this year I decided to give up almost all my research activity and focus on this. However, in addition to being director of this laboratory, I’m now also the director of valorisation for the Faculty of Science.

Valorisation is a Dutch academic term – indeed you won the NWO Physics Valorisation Prize in 2018 be­cause of the val­ori­sa­tion of your own re­search and the at­ten­tion you’ve given to helping others do the same. What’s your definition of valorisation?

You will find thousands of definitions for valorisation, but my interpretation is that it’s essentially knowledge transfer and co-creation, in the broadest sense of the word. It’s about developing academic knowledge to, for, and with society. It is when you do something to have impact beyond the specialized audience you write papers for.

I think you can say you’re successful in this if other people, beyond your colleagues and friends, make use of the result of your research in some way. And when I say “make use” I mean it in the broadest sense. It could be that they’re literally using something day-to-day that’s a direct result of your research, or it could be that they simply learn something that they didn't know before.

Do you think that researchers are given enough time to dedicate to ensuring their work has an impact?

I think there’s a lot of pressure on researchers, particularly early career researchers, in the sense that they're being told they need to fulfill various academic requirements but then also think about valorisation and so on.

We can’t think that to promote technology transfer, knowledge transfer, the day will become 28 hours long. At some point a decision needs to be made at a strategic level that we’re going to have a more balanced approach to what we ask from researchers – in terms of how they’re assessed, for example. It’s something we say all the time to our academic entrepreneurs – it’s not about what to do, but about what not to do, what to cut.

I don't have the solution to this. But I think we have to recognise that we can’t ask researchers and teachers to add something to their plate without taking something away. If you want to make knowledge transfer effective, you have to spend time on it. It takes commitment, you need to learn how to do it. And that can’t be done on top of all the other things we already do.

Why do you think valorisation and societal impact are important?

For me, I think the importance of encouraging valorisation and societal impact is that researchers don’t stop too early. They don’t stop at the point of publication, thinking, “My work is out there now, that’s my job done.”

I think we have a mandate to maximise how our research is used in an impactful way. That doesn't mean that each individual researcher has to go through the entire process of taking their research through to societal use. Some research topics are simply not suitable for that. But we must create a culture where all researchers seriously ask themselves: “Can taxpayers make use of what I have discovered?” If we don’t do that, maybe we should question whether we are really fulfilling the mandate we have received. 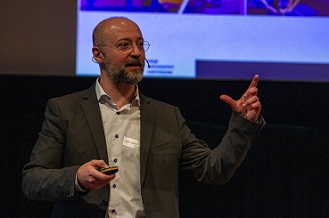 About Davide Iannuzzi
Davide (PhD, MBA) holds a full professorship in physics at the VU University Amsterdam, where he serves as Director of Valorization of the Faculty of Science and Director of the Demonstrator Lab.

He is one of the two co-founders of Optics11 BV and has coached dozens of teams in the early phase of idea-to-market. He is author of the book "Entrepreneurship for Physicists”, where he has collected all he knows about academic entrepreneurship.