To celebrate Human Rights Day this December and its links to SDG 16: Peace, Justice and Strong Institutions, we hear from one of our authors Iulia Motoc, and her perspective as judge at the European Commission of Human Rights. Her blog explores humanism, dignity and the role of the judge in changing times. Motoc’s book, The Rule of Law in Europe: Recent Challenges and Judicial Responses, published with Springer, is available now.

On Human Rights Day this year, we will be discussing how the position of judge at the ECHR can be reconsidered. Let's rethink not because the ECHR didn't work well, but because improvements can be made all the time. In an age that many of us think belongs to new technologies and posthumanism, it is necessary for the human rights judge to think about his relationship with humanism and especially that of being in a relationship with victims, to be an “embodied” human rights judge.

Posthumanism will apparently mark the end of legal humanism and the beginning of new humanities. Legal humanism in the face of new technologies, it is indeed open to assert that human rights is the bearer of a certain humanist philosophy, that it adheres to this “philosophical attitude, […] which takes Man for end and supreme value, which aims at the development of the human person and the respect of his dignity”.

Humanism is capable of receiving schematically three interpretations. The first is, historically, that which aims at the knowledge of the humanities. Thus, the efforts made in terms of accessibility of the Law are gradually causing the heirs of the Digest and the Corpus Iuris Civilis to lose their references and citations for which jurists had such a great reputation. Legal humanism would have as its aim here "the culture which, perfecting the natural qualities of man, makes him worthy of the name". In a second sense, it covers the friendship of humanity, philanthropy in other words. And finally, in a third sense, it aims at the consideration of Man as the holder of a supreme value, placed at the top of the hierarchy of “beings”, representing an end and not a means, to use the categorical Kantian imperative. It is really these last two senses that the present questioning of legal humanism is aimed at: has Law definitively banished these values ​​transcending Man so that he, the individual, is the only end of Law?

This dignity comes in apparent contradiction with the more subjectivist conceptions, in any case subjective, for which dignity, based on the autonomy of the will, leaves individuals masters of their destinies and is protected from the attacks therein. would be worn by the State or by a third party. These new conceptions of dignity which provide that the individual must respect a certain standard of conduct in accordance with his dignity make it possible to counterbalance the absolutism of human rights, absolutism which could be legally denounced. As well as in all the standards requiring Man to respect his environment, his genome, animals ... It seems in apparent contradiction with the first of these conceptions of dignity since it encloses Man in an environment (in the broad sense) and not necessarily placing him at the pinnacle, in any case as master and owner of nature. By this vector of the dignity imposed on him, beyond respecting one's humanity or that of other people, this is also the case for the development of one's obligations towards animals, the environment or future generations. Carbonnier was able to speak in this regard with reason of an "erasure of the Enlightenment”.

It fits into the context of the issue of the victim's "return" in contemporary penal thought. Long considered the "forgotten person" or the "poor relation", the victim now appears as the "new star of the penal scene"In general, international texts are part of the search for a balance and equality of rights between the parties to the trial. This is in substance the meaning and scope of the Declaration of basic principles of justice for victims of crimes and abuse of power which was adopted by the United Nations General Assembly in its Resolution 40/34 of November 29, 1985.

At the level of the Council of Europe, the Recommendation on the position of the victim in the framework of criminal law and procedure adopted by the Committee of Ministers June 28, 1985 also aims for a wider international recognition of the role of victims and their legal position in the trial.

Finally, we must observe a real "turning point" in favor of the victim in the development of international criminal justice.

First of all, the experiences of ad hoc international criminal tribunals have certainly increased awareness and sensitivity to the physical and psychological consequences that hearing victims as witnesses can cause. Hence the need, as we shall see, to protect witness-victims. Then, thanks in particular to the strong pressure of the NGOs gathered in coalition during the diplomatic conference of Rome in June-July 1998, the place of the victim was recognised in the statute of the International Criminal Court of which article 68 is enshrined. under the title "Protection and participation in the trial of victims and witnesses”.

In 1989, Professor S. Trechsel, President of the European Commission of Human Rights suggested adding a protocol to the European Convention on Human Rights which would have guaranteed, or more exactly codified, the essential rights of victims in the framework of the criminal trial, thus offering a sort of parallel with a text envisaged on the human rights of detainees. The advantages of such a protocol would have been to point out, with a view to correcting them, the most essential flaws in the various existing laws and thus to exert a kind of "pressure" on national legislators to modify the texts. But perhaps his essential contribution would have been of a symbolic nature: to recognize definitively that the victim is not a "foreigner" (outsider) in the criminal trial, that she is more than a witness, that she is an involved and concerned person. 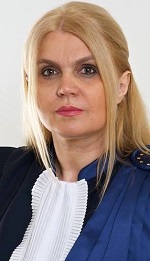 Iulia Motoc is a Judge at the European Court of Human Rights and Professor of Law at the University of Bucharest, Romania. She has also served as a judge at the Constitutional Court of Romania an as the Vice-Chair of the UN Human Rights Committee, an UN Special Rapporteur and President of the UN Sub-Commission for the Promotion and Protection of Human Rights. Motoc was member of Advisory Committee on the Framework Convention for the protection of National Minorities, Council of Europe and of the member of the Council of the European Union Agency for Fundamental Rights. She was guest professor in several universities in US and Europe.  Motoc holds two PhD in international law and philosophy from the University of Aix-Marseille and for the University of Bucharest as well as a Masters’ degree from the University Aix-Marseille. She has published in the area of international law, European law and human rights.