The Evolution and Future of Systems Sciences

What is Systems Sciences and how new is it?

The foundations of systems science include concepts such as wholeness, relationships, and cycles of change.  Those can be found in many of the earliest cosmologies of our ancestors.  More developed ideas about processes and context came from the philosophers of Ancient Greece.  Attempts to formalize systems concepts into science are usually traced to the early 1900s, and from there found their ways into General System Theory, cybernetics, and later, complexity theories.

What is the role of Systems Sciences in the post-COVID world?

The COVID-19 pandemic has surfaced many of the divisions between public health and medical treatment.  Some treatments are meant to attack and kill viruses, bacteria, or cancerous cells in humans.  Other treatments attempt to increase natural immune systems.  But medical treatments occur only after infections of individuals or groups.  A broader perspective, such as public health, looks not only for sources of those infections, but also for as many possible, future sources as can be identified.

With respect just to viruses, there are hundreds of thousands of different viral species infecting mammals.  Some of those could cross from animals to humans, as did COVID-19.  Most viruses, however, will not, and those viruses are important to the functioning of the biosphere.  Likewise, bacteria inhabit every living part of Earth’s biosphere, including our skin and digestive systems.  Bacteria created the oxygen which allowed life, as we know it, to evolve.

Human health will not come from killing all “germs.”  We have to understand our interdependence with every other level of organism on the planet, and that is a systemic perspective.

What is the purpose of the Handbook of Systems Sciences and how do you envision it being used?

The Handbook provides a diverse set of examples for how systems science has affected, or been used by, specific practices or domains of knowledge.  The hope is that other students and researchers can learn from the examples, and begin to apply the principles to their own fields of study.  The more complex the challenges facing humanity become, the larger the frames of understanding will be needed for addressing them.

How is Systems Sciences studied/taught/researched in universities worldwide?

There are few centers of research which focus on systemic principles, per se, i.e. pure systems science.  Most recent research has focused on applying the principles to existing disciplines, such as systems biology.  Sometimes, the basic principles are taught as “systems thinking.”  In branches of the U.S. government, and in some corporate settings, the principles are applied as part of design thinking.

How do you envisage the future of Systems Sciences?

As recognition increases about the systemic nature of many problems (socio-technical challenges, food systems, species extinction, climate change, etc.), the need for research into systems science may become more apparent.  That will very likely be encouraged by an awareness of connectedness and interdependence at many levels.  For instance, most financial investments in recent decades have been targeted to information technologies and engineering (of many kinds).  Our technologies, however, will not overcome our biological existence.  We need to work towards technologies which speed and increase our abilities to help regenerate the natural biosphere, including soil and clean water and air, and the micro-organisms which produce them.  Based on those foundations, we can begin to build the economies infrastructures of our future.

Editor in Chief of the Handbook of Systems Sciences, Gary S. Metcalf, discusses the Handbook 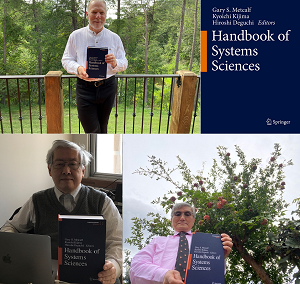 About the Editors of the Handbook of Systems Sciences:

Gary S. Metcalf is a systems theorist and practitioner. He has worked as a family therapist, and as a manager in large corporations. He taught at universities in the USA, Finland, and India for 20 years. He served as president and vice president of the International Federation for Systems Research from 2002 to 2018, and as president of the International Society for the Systems Sciences in 2008. He has consulted with international corporations, small non-profit organizations, and with the US government. His research and writing have spanned topics from social systems design to service science to leadership. His most recent interests include the social, economic, and political impacts of climate change.

Kyoichi Kijima is professor emeritus, Tokyo Institute of Technology; specially appointed professor, Daito Bunka University; and adjunct professor in the School of Business Management, Bandung Institute of Technology, Indonesia. He also holds appointment at The Open University of Japan. Prof. Kijima has been a member of the International Society for the Systems Sciences (ISSS) since 1980, where he served as president of the Society in 2007. He also served as vice president of International Society for Knowledge and Systems Sciences (ISKSS) and of the International Federation of Systems Research (IFSR). He is a member of the International Academy of Systems and Cybernetic Science (IASCS) and of World Organization of Systems and Cybernetics (WOSC). Prof. Kijima worked as president of the Japan Society for Management Information (JASMIN) from 2016 to 2019. Since 2013, he has worked as editor-in-chief of the Translational Systems Sciences book series published by Springer. He began his academic career with researches on the mathematical general systems theory. His current interests are in a wide spectrum of systems science from decision systems science to service systems science to soft systems approach.

The following chapters from the Handbook of Systems Sciences are available to download for free until December 31st, 2021 using the links below: