Exploring societal impact: “It takes dedicated time to have an impact.” In this interview, we speak to Floris Peters, a postdoctoral researcher at Maastricht University and visiting research fellow at the Malmö Institute for Studies of Migration, Diversity and Welfare. He tells us how his PhD research may have played a pivotal role in changing the course of a Dutch government proposal to change citizenship requirements for migrants.

In 2018, you were awarded the FASOS Valorisation Prize in recognition of the societal impact of research you conducted as part of your PhD. Could you tell us a bit about this research?

First and importantly, I don't take sole credit for this work – it was very much a team effort. The research was part of my PhD and my supervisors played a pivotal role in encouraging and then helping me to achieve what we did.

In the Netherlands, there was a proposal by the former government to increase the residency requirement from five to seven years. This had already passed in parliament’s Lower House. But the coalition that had helped it pass in the Lower House didn't have a majority in the Upper House. So it wasn't certain that it would happen.

A lot of the arguments around this proposal were based very much in politics, rather than fact. We looked at this and we said, let's find out what the impact of this change could actually be. What is the impact of restricting access to citizenship in this way?

What were your initial expectations as to the outcomes of the research and what were the results?

We expected that the proposed change would actually have a negative impact on migrant integration outcomes for a number of reasons. One simple example – integrating well is often related to employment and it’s generally easier to get employment as a Dutch citizen.

In addition, to become a Dutch citizen you also need to invest in acquiring certain skills and knowledge because these are requirements of citizenship. You need to learn the Dutch language, for example. And that also matters for your labour market outcomes.

We expected, and it turned out to be the case, that if you want to become a citizen and you do this earlier rather than later then it almost “kick starts” your integration process. A simple example – you could have someone living in the country for 15 years who picks up the language simply by living here. That person would likely already have the required linguistic capabilities to naturalise without further effort. But if you decide to become a Dutch citizen after five years then you invest in yourself to reach the same language level far sooner.

We essentially showed that if we compare migrants who naturalise quickly to those who do so less quickly, accounting for all the differences between these groups, the boost that migrants receive in the labour market is higher for those who do it quickly. Which in turn showed that the proposed policy could have had a detrimental impact on integration outcomes.

Your research findings played an influential role in the Upper House vote. How did you communicate them and ensure they got in front of the right people?

We made a strategic decision to publish the results first in Dutch journals that we knew policymakers would read. The experience of my supervisors was incredibly useful in this regard because they knew which journals would be suitable.

And it wasn’t as easy as I initially thought it would be because I had to translate the complex academic papers into something that was methodologically still complex, but which was pitched in a more accessible manner.

My supervisor also got in touch with some policymakers and brought our work to their attention. Then, when the debates took place in the Upper House, some of the senators referenced our work and the deputy minister who was in charge of getting this bill through had to respond.

It was an interesting and strange experience – to have politicians commenting on your work but without you being able to respond. We were closely following the debates and we realised the deputy minister had clearly misunderstood one of the things in our paper, so we had to quickly publish another one to explain what it was that he’d misunderstood.

It was a bit of a frantic process and very different from the normal pace of academic research where we’re very used to taking our time and writing stuff down in detail. Here we had to act quickly.

We published multiple times, we posted on blogs for economists and also legal scholars in order to get the word out. By this point the majority for this proposal in the Upper House was becoming narrower and narrower – both due to questions raised by our research and a number of other considerations that started to be raised.

Eventually, there was just not a majority for the proposal, and as a result, the residency requirement is still at five years in the Netherlands. Of course, it’s difficult to measure the extent to which our work made the difference, but I’m fairly confident that it mattered.

As a PhD student, having your work analysed in such a public arena must have been incredibly daunting. How did you navigate that process? Did you have support?

Yes – it was actually kind of terrifying. When the deputy minister is talking about and criticising your work, it feels almost as though they're referencing you personally. I was incredibly lucky to have support from my supervisors in managing this process.

If my supervisors had been unsure about whether this was a good idea, if they’d seen this ‘impact’ side of my work as not the business of a PhD, I might have backed off. It felt as though it could easily get out of hand. The fact that my supervisors were just as interested in getting this done really mattered. I had their full support and cooperation throughout.

That meant I could really focus on making sure the work was correct and they helped to deal with the process-related things. Without that help, I wouldn't have known where to start.

And now, having had this experience and support, I'm much better equipped to do this type of work on my own. Both because I have experience of the process and because I now have much more of a network than I did back then.

The support from your supervisors was clearly vital in allowing you to have impact with your work. Do you think this is a common experience for PhD students?

As a PhD student, you’re very dependent on your supervisor. And you would need them to “green light” any time you spend on impact-related work. I think it's easy to underestimate how much time it takes to have an impact.

Unfortunately, at the moment, PhD students and supervisors work within the framework set by the university which is designed with the singular purpose of finishing the PhD. That's what matters. In the Netherlands, the funding for PhDs only gets released to the university after they’re completed. And nothing about finishing the PhD requires societal impact – it's all about the academic product that you're delivering. So I think that impact can often be forgotten.

I suspect that many PhDs, even if they wanted to, could not have the impact they want and spend time on it because their supervisors won't make time for it. I feel I was really lucky in that regard, to be given the time and the support to pursue this side of my work.

To round up, could you tell us why you feel so strongly about the societal impact of research?

I'm a researcher. And as a researcher, my primary goal is to expand our understanding and knowledge. That's my job description, so to speak. But on a personal level, I derive a lot of my motivation and enthusiasm for doing this from the belief that it matters – beyond the world of academia.

Having an impact isn’t in my job description – I don't really get specific time allocated to work on having an impact. But this is something I care about and that's why I’ve made it happen –  because I want to invest in that. Of course, it does depend on what type of research you do as to what impact you can have.

But I think we underestimate how all types of research can have an impact. And I believe the public is more interested in it than we tend to expect. So I hope that with time – and there’s a slow shift towards this now – societal impact will become a more important part of the role of researchers and that we’ll be given adequate time to dedicate to it. That’s not to say that it has to become the focus for every researcher, but for those of us who want it, I hope there will come a time where it’s better facilitated. 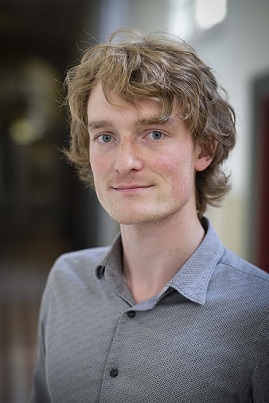 Floris Peters has a PhD in Political Science from Maastricht University and a Masters degree in General Social Sciences from Utrecht University in the Netherlands. He currently works as a postdoctoral researcher in the MiLifeStatus (Migrant Life Course and Legal Status Transition) project, funded by the European Research Council, and led by professor Maarten P. Vink.