“There is little time left ecologically to resurrect clear-headed sustainable existence”: Why societal impact is everything

At Springer Nature, we are committed to bridging the gap between research and policymaking by helping researchers increase the societal impact of their work. As part of our SDG15 hub launch, dedicated to life on land, we asked several experts how they work to make sure their related research is reaching those that need it most to make urgent decisions when it comes to the future of our planet.

Written by Michael Tobias, co-author of Bhutan: Conservation and Environmental Protection in the Himalayas

Our focus (mine and that of my co-author Jane Gray Morrison) is explicitly related to the 17 UN Sustainable Development Goals, plus one additional target, namely, the safekeeping of biodiversity, aka, animal rights/animal liberation. The U.N. goals are devoted first and foremost to our species – poverty alleviation, sustainable production and consumption, an end to hunger, etc. But the context in which our species is solely relevant is the entire panoply of the natural world. We are one species out of possibly hundreds of millions (taking into account the 3 principal domains of life). Without endeavoring to account for every linkage between the levels of life, we are speaking only to the choir. The critical conversions are in those gaps between species, wherein H.sapiens works to find new modes of translation; ways of signaling that embody what we call the reciprocity potential, namely, all those prospects for interspecies empathy and understanding.

Societal impact is everything. Humanity is struggling on the cusp of the Anthropocene, the first global mass series of extinctions predicated solely on the behavior of one species, ours. Hence, the more broadly and urgently our message of concern, analysis and rectification can be disseminated, the more likely there will be change, however incremental.

There are critical vectors for communication. The obvious ones – books, articles, films, social media, symposia – are exponentially on the increase amongst the more than 200 million researchers in the world. We tap into all of those modalities to the extent possible. But we also recognize in our work that friendships, tightly embedded fellowships involving often just a few people working in the field together, can make a marked difference with respect to ecological remediation, even philosophical sanity at those times when one feels deeply alone. We all remember anthropologist Margaret Mead’s famous quote, “Never doubt that a small group of thoughtful, committed citizens can change the world; indeed, it's the only thing that ever has.” Because our own most modest work is ecologically focused, it must also be pointed out that direct communication of some sort with other species may ultimately be the most rewarding. We have “met” remarkable individuals of other species; have gotten to know them in the wild, with no less an intensity than that experience between people and their plant and animal companions. Such in depth encounters and sustained relationships may ultimately prove to be the only ultimate antibody to the negative aspects of our presence here on earth.

Every act of communication is ultimately an act of translation, as the great literary critic George Steiner once said. But the differing efficacies of translation is a most difficult factor to assess, particularly amongst other biological organisms. It may be impossible to fully grasp what is going on. Even amongst our own kind, the fragility of statistical polling is fully suspect. But, ultimately, we believe in books; in sitting down with a book day after day, night after night and being transported, fully absorbed. Our writing is particularly oriented to the real-time experience of a readership that is willing to be carried away in the flow of thoughts that we explore. Our voice, ultimately, is the only remainder in a life, a voice that hopefully reaches others with the exclamation points, intimations, signals and handprints of an existence that tries to matter; to help ameliorate pain and suffering. That is a worthy and most timely goal to struggle towards.

To that end, we set no preconditions to the readership, whoever those individuals may be. Because our work involves behavior, ethics, and the softening of contact between species and ecosystems, we are obviously especially concerned to tap into those inflection points that can be expressed as community standards, codified benchmarks of policy and legislation; inspirational bifurcation pivots whereby people actually consider change, and then go beyond mere consideration in their individual behavior. The soul speaks when it is spoken to.

This latter concept is at the heart of speaking one’s own mind, striving to be virtuous. Intuition before logic, wrote the philosopher Nikos Kazantzakis. We feel strongly that an ethical orientation must compel us like never before to embrace our humanity before succumbing to the temptation of numbers, quanta, theoretical positions. We have lived with theories, hypothesis and big numbers for thousands of years. But more importantly, we have lived. And it is the living component that will ultimately persevere beyond academia and scholarly circles. Now, more than ever before in our entire 330,000 year history as a species, we have an obligation to speak with one another, honestly, forthrightly, clearly. There is little time left ecologically to resurrect the kind of clear-headed sustainable existence – as individuals, communities and nations – that can head off, quite literally, the extinction of our species. We fully believe that. So our job to have an impact is crucial. There is no turning away from this fact. Michael Tobias, long-time president of the Dancing Star Foundation (dancingstarfoundation.org), earned his Ph.D. in the history of consciousness from the University of California-Santa Cruz, specializing in global ecological ethics and biological systems, as well as the interdisciplinary humanities. His wide-ranging work embraces the global ecological sciences, art, comparative literature, the history of ideas, philosophy, and natural history. Dr. Tobias is the author of over 60 books – fiction and non-fiction – and has written, directed, and/or produced over 50 films (mostly documentaries,docudramas, and TV series). Tobias’ works have been read, translated, and broadcast throughout the world, and he has, in addition, conducted ecological field research in nearly 100 countries. 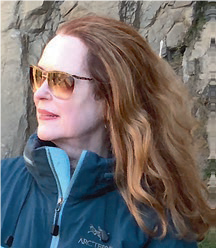 Jane Gray Morrison is an ecologist whose work has taken her to over 30 countries. As a filmmaker, Ms. Morrison has produced numerous films for such networks as Discovery, PBS (where she co-directed “A Day in the Life of Ireland” for Irish Television and WNET/New York), “Hotspots” (www.hotspots-thefilm.com), and Turner Broadcasting, for which she served as senior producer for “Voice of the Planet,” a

10-hour dramatic series based upon the history of life on Earth, and as a Goodwill Ambassador to Ecuador’s Yasuni National Park, where she produced the short film “Yasuni – A Meditation on Life,” which premiered at the United Nations Rio+20 Summit in 2012. Her books include Sanctuary: Global Oases of Innocence (www. santuary-thebook.com), Donkey: The Mystique of Equus Asinus, God’s Country: The New Zealand Factor, and No Vacancy (co-edited). She has co-written five previous books published by Springer. Since 1999, Jane Morrison has served as the executive vice president of Dancing Star Foundation, a nonprofit organization that focuses on animal rights, the interdisciplinary humanities, and social and ecological justice movements as they concern humankind’s relationship to the natural world.