International Year of Fruits and Vegetables: Perspectives from an environmental physicist

2021 has been designated the International Year of Fruits and Vegetables (IYFV) by the UN General Assembly, an opportunity to raise awareness on the important role of fruits and vegetables in human nutrition, food security and health and as well in achieving UN Sustainable Development Goals.

We're honoring this designation by sharing the perspectives of researchers whose work relates to IYFV. Here we speak to Gidon Eshel, a professor of environmental phyiscs whose work quantifies the geophysical consequences of agriculture and diet.

What is the focus of your research work and how is it related to IYFV?

How important is societal impact to your research? Why?

I am driven roughly equally by curiosity and deeply-held disdain for environmental inefficiency and  waste. And the latter is all about societal impact, it is front and center. I mostly strive to impact the behavior not of people who just don't care, but of those who care, but who lack the technical background to make quantitatively sound choices and who thus often fall prey to various environmental and nutritional self-styled gurus. My job is to replace the gratuitous assertions of such gurus with actual facts.

What do you believe are the most effective ways of communicating your research?

Public talks, I am writing a popular book now called Planetary Eating (MIT Press, late 2021 to early 2022), I participated in several major big-screen and TV documentaries , and I am now in the process of launching a for-profit environmental venture focused on drone-based sequestration verification with a group of Israeli tech people.

Who do you prioritize reaching and why? ie: policymakers, educators, health professionals, the general public, etc.

All of the above, really. Whoever is interested, has an open mind, and is curious.

What advice do you have for researchers who are looking for ways to make societal impact, in other words, impact beyond their scholarly circle/academia?

I do not consider myself as someone who has cracked that nut. I try, using the afore-mentioned ways. I have been modestly successful, but I'm definitely very far from having nailed the problem of societal impact... So really nailing it is left for others who think they did.... 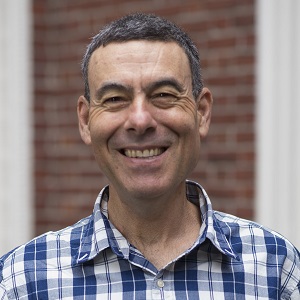 About Gidon Eshel
Gidon Eshel is a research professor of environmental physics at Bard College and runs the website environmentalCalculations.com. He is best known for his work quantifying the geophysical consequences of agriculture and diet. Most recently, he has compared various livestock in terms of land and water use, fertilizer-based water pollution, and greenhouse gas emissions per unit product and compared the global-warming consequences of different beef-production strategies (including grass- versus trough-fed beef). His widely varied scientific interests also include the development of algebraic tools for simultaneous optimization of health and environmental outcomes through dietary choices, climate physics, and measures of time scale–specific ecosystem stability.

At Radcliffe, Eshel is collaborating with scientists from the Harvard University Center for the Environment and the Harvard T.H. Chan School of Public Health on developing multi-objective metrics of diet. The metrics combine disparate environmental impacts (e.g., greenhouse gas emissions or water and land use) with health outcomes (e.g., cardio- and cerebrovascular diseases or diabetes) in a manner most suitable for using in optimizations designed to improve public health while easing environmental burdens.

Eshel studied physics and earth sciences at the Technion and the University of Haifa, in Israel, before getting an MA, an MPhil, and a PhD at Columbia University in mathematical geophysics. Before his post at Bard, he was a NOAA Climate & Global Change Postdoctoral Fellow hosted by Harvard, a staff scientist at the Woods Hole Oceanographic Institute, and a faculty member of the Department of the Geophysical Sciences at the University of Chicago.