Capitalism, Cops, Covid and The #MOBP

I wrote The Myth and Propaganda of Black Buying Power (#MOBP) because as an activist I had been hearing for years the claim of this untapped economic potential and because as an academic inspired by the tradition of Black/Africana Studies as intellectual supplement to political struggle I wanted in some small way to think I could help inform, or prepare, or aid what I’ve always understood would be, will be, necessary political struggle if the Black lives now up for reconsideration are ever to attain legitimate, lived, experienced material improvement. The sad reality is that no student of or, better yet, participant in political movements, and organization was shocked by the police killing of George Floyd, or even the uprisings which emerged after. Quite to the contrary. Many of us knew this would occur, have known it would, and know it will again, and have only wanted to find ways of contributing at least to the parallel struggles over interpretation and response.

At its core the #MOBP is an attempt to provide readers - current, future and potential activists included – with an alternate reading of economic and political mythology and the ways in which our media environment shape or impact our decision-making ultimately in an attempt to prevent the questions now being raised and certainly to manipulate the forms of answer or response. A combination of capitalism, cops, and Covid have people in the streets demanding an end to the violence of anti-Black public policy, social, and economic structures those police are, as an institution, here to protect. At the same time, however, the very economic and political elite in charge of the design and function of those structures are working feverishly to manage the response, shape its outcome and, as fast as possible, return us to a norm which, as the #MOBP details, was already unsustainable, worsening, and leading those in power to already be in preparation social unrest. Well before 2020 or the outbreak of any pandemic those in powerful circles were already ringing alarm bells and preparing responses. We already knew from the uprising following the police killing in Baltimore of Freddie Gray that Homeland Security / FBI Fusion Centers were being developed and deployed to measure and manage those outbursts. In 2018 Pentagon “war games” developers were preparing for a “Zbellion” of Generation Z already fed up with wars, poverty, and debt. And as I document in the #MOBP, venture capitalists were warning that inequality was pushing society to the breaking point and that without greater redistribution of the wealth we all create there were already legitimate fears that people would storm the gates of the rich demanding justice.

The #MOBP is itself a call for a #RespectMyConsumption approach which reminds us of the reality and centrality of the shopper, the consumer, to the current economic system and says that we all should benefit (more) equally from the wealth we all help generate. As we are seeing now, when people cannot spend, cannot shop, cannot move their money around the entire economy everyone – even the most elite – all suffer. Rather than the previous norm of blaming Black (all) poor people for being “financially illiterate,” for foolishly spending their money on frivolity, we should evolve a more realistic and healthy appreciation for that consumption because it is precisely what drives the economy and keeps people working. When people don’t buy food, clothes, cars, rims, fronts, hair, and electronics businesses close, people, Black people, poor people, lose their jobs. If rents can’t be paid, even the landowners suffer. And as I argued in response to a conservative radio host who derisively asked me if I really thought the one buying the pizza was as important as the owner of the pizzeria I said absolutely! If not before it is almost terrifyingly obvious now; one without the other is useless.

Almost. And this is where public policy becomes so important. The ownership classes which would have control over that pizzeria, and its entire chain, are also largely entirely in control over the laws, regulations, tariffs, trade-agreements, banking standards, etc. which, for instance, give them the unequal benefit of having actual say in where that GDP we all help generate ends up. Here comes the crisis, the economy is shut down as people are forced into their homes and out of their workplaces, tens of millions of jobs are lost (so far), and yet what is egregiously referred to as a “CARES Act” takes care only of the most wealthy corporations by both creating for and redistributing to them roughly $6 trillion while foisting an embarrassingly insufficient penance onto the mostly jobless rest. And just as is discussed in the #MOBP, the cavernous gap between the material reality of insane inequality and promised responses are waves of propagated political myths in the form of symbol and weak legislation by elected officials, economic myths from the corporate world writing that legislation, and social mythologies pushed by celebrity promising the hope that we can all enjoy in this madness if we calm down, go home and behave.

So back we go to the start, where I and we in academia who want Black liberation find ourselves struggling to find relevance within a struggle, and to pierce the endless parade of confusion. If nothing else, the #MOBP encourages readers to lift the hood on their politics and media, to check the label, the manufacturing history of the ideas with which they are grappling. There is a context of political conflict in need of greater acknowledgement as we consider what messaging and concessions we accept, or what forms our resistance will take because in the end, it is as Bob Marley foretold, “Now you get what you want. But do you want more? Want more!” 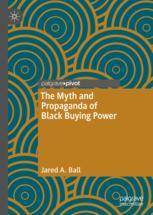 Jared A. Ball is Professor of Communication Studies at Morgan State University, USA. He is the curator of imixwhatilike.org, an online hub of multimedia dedicated to the philosophies of emancipatory journalism and revolutionary beat reporting.

Jared Ball's latest book, The Myth and Propaganda of Black Buying Power is available from Palgrave.