In our Proud to Publish series we talk to our book editors about the books they were most proud to publish, commission or work on in the past year. Read our interview below with Martin Peters, Executive Editor, Mathematics, who talks to us about the book he is most proud to have published in 2020, how the book evolved and why he chose this title.

Thinking about books you’ve signed or published in 2020, which one are you most proud of?

I am proud to have published Real and Functional Analysis by Vladimir Igorevich Bogachev and Oleg Georgievich Smolyanov. It’s an outstanding textbook, which arose from lecture courses at the famous Mekhmat Faculty at Moscow State University and the Faculty of Mathematics at Higher School of Economics in Moscow. These courses are fundamental for the education of students in mathematics and physics, and the first course of this type at Moscow State University was created by the famous Andrei Nikolaevich Kolmogorov. The book appeared in the Moscow Lectures series.

The book stands out by being extremely well-written and by its comprehensiveness. A student will find anything he or she would ever like to know in the field, and the authors carefully explain how the book relates to other well-known textbooks in the field. The whole work gives a guided tour to the field and it is an amazing achievement.

I have met Vladimir Bogachev at Higher School of Economics and when the book appeared, he happened to be at University of Bielefeld. We then exchanged a few jokes about the city which does not exist. 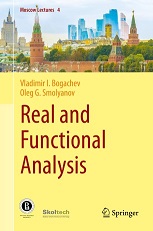 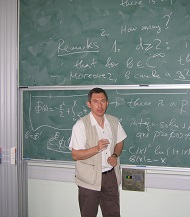 Vladimir Bogachev, born in 1961, Professor at the Department of Mechanics and Mathematics of Lomonosov Moscow State University and at the Faculty of Mathematics of the Higher School of Economics (Moscow, Russia) is an expert in measure theory and infinite-dimensional analysis and the author of more than 200 papers and 12 monographs, including his famous two-volume treatise "Measure theory" (Springer, 2007), "Gaussian measures" (AMS, 1997), "Differentiable measures and the Malliavin calculus" (AMS, 2010), "Fokker-Planck-Kolmogorov equations" (AMS, 2015), "Topological vector spaces and their applications" (Springer, 2017),  "Weak convergence of measures" (AMS, 2018), and others. Vladimir Bogachev solved several long-standing problems in measure theory and Fokker-Planck-Kolmogorov equations. He received Award of the Japan Society for Promotion of Science and Kolmogorov’s Prize of the Russian Academy of Science. 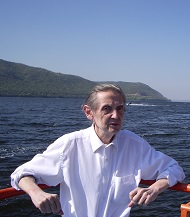