1 Million Gold Open Access Articles is only the beginning

In 2021 Springer Nature became the first publisher to achieve the feat of publishing one million gold open access articles. It is a testament to the hard work done by both publishers and the library community, a result of over two decades of improvements and pushing boundaries. As Springer Nature celebrates this significant milestone, it is also a time to look back on the journey, and continued investments in an open research future.

There has always been a lot of excitement about the potential of open access (OA) to change the publishing industry and speed up the process of scientific discovery and progress, but it can be easy to forget that there was also been a lot of skepticism in the early days. Today the benefits of OA are widely acknowledged. OA articles have increased usage and impact, they have the potential to reach those who would not otherwise have had access, with gold OA in particular being shown to have greater access than subscription articles with earlier versions available*. In the early days, however, it was not so obvious to everyone that research should be open, or could be made open in a sustainable manner without compromising on the quality of the work that was published.

Reaching the milestone of one million gold OA articles is not only proof that much of the early skepticism was unjustified, but it is also a testament to the hard work that has been done by both publishers and the library community. It has not only required the successful promotion of OA to researchers, but also a lot of hard work to ensure that the routes to OA are as accessible and equitable as possible. The changes necessary to reach the one million gold OA milestone didn’t happen overnight, but have been the result of over two decades of improvements and pushing of the boundaries. Springer Nature and OA have come a long way since BMC was founded in 1998 as the first commercial OA publisher, with many innovations to ensure that OA is at the heart of all that Springer Nature does:

Impact that is only possible through OA

Those one million gold open access articles have been downloaded over 2.6 billion times since 2016, in virtually every country in the world, and even in Antarctica. The top hundred articles have been downloaded over 43 million times, and the top article over 1.67 million times (despite only being published in 2020). This is the sort of impact that is only possible through OA making the research as widely available as possible, and gold OA providing access to the version of record.

Speeding up the process of scientific discovery 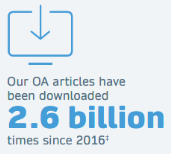 OA is not the ultimate aim however, rather it is seen as the best way to speed up the process of scientific discovery and make scientific findings available for solving the big challenges facing the world today. Many of these big challenges, whether tackling climate change or global poverty, require insights from many different research groups and disciplines. OA and associated practices of open research (such as open data and open code) provide opportunities for linking different aspects of open research together, connecting diverse research, and building upon it in new and innovative ways. Already content related to Sustainable Development Goals (SDGs) makes up a greater proportion of OA research than non-OA research.

Springer Nature is committed and invested to an open research future, and will continue to pioneer OA, OA options and agreements, and champion gold OA as the best and most sustainable route to achieving that. To discover more about Springer Nature’s journey to one million gold OA articles, and to hear what the stakeholders from BMC, the Nature Portfolio, and Springer think about the achievement.